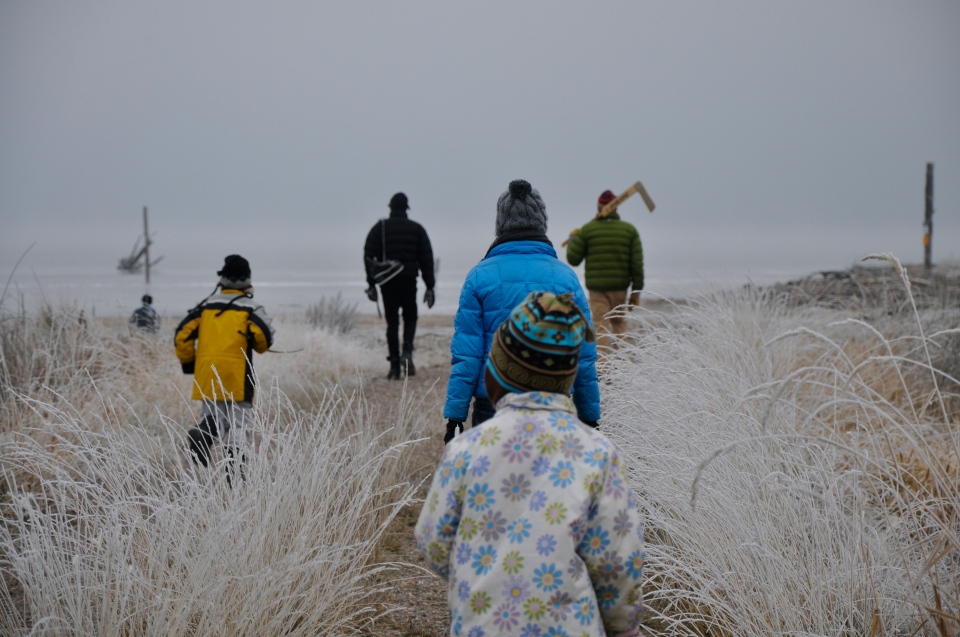 12.01.13  This photograph was actually taken three days ago, on Thanksgiving.  We all declared it to be a quintessential old-fashioned holiday.  The trees and bushes were coated in frost, the ice was smooth and clear, and we had a rousing game of hockey in the afternoon hours before the turkey came out of the oven, returning to dinner in front of the fire.  This morning, on the first day of December, I walked back out to where we had played, and found the ice had melted.  Roaring waves, driven by the strong southwesterly winds, rolled over our ice arena and rain pelted me in the 40 degree temperature.   A big bald eagle circled low, right over our spot.  By the end of today, the weather forecast calls for a rain and snow mix here in the valley, and by early Tuesday, the winds should shift from the north, spilling arctic cold zero temperatures down from Canada.

Everything is temporary and time moves on, of course.   It’s become a ritual for me in December to light a candle each dark morning when I wake up, letting it burn until there is some light outside.  I do this every morning, until the Solstice, when I let a candle burn all through the longest night.  Then, even though I can’t see it, I trust that the earth has continued her perpetual journey to tilt and rotate in such a way that light will return to the sky, and I no longer need light the morning candle.

Faith, I guess, is part of this ritual.  Faith that the universe is unfolding just like it should and I need only flow along with it in my own little orbit.  The candle light also reminds me that another year is coming to a close, another year of my life over.  We are all temporary.  Just drops of rain, melting ice.  It’s good to be reminded of that in December.  Last year, after lighting my candle each morning, I took a small piece of paper and wrote on it what I no longer needed in my life–just one thing each day.  Not the material possessions clogging my drawers and closets, but the qualities in me which no longer serve me well.  Among the classic deadly sins, there were more personal aspects of how I am in the world, which I no longer need, if I am to make the most of this transitory time on earth.  Then, on the morning of the solstice, I  burned the pieces of paper in the fireplace, letting them turn to ashes.  I can’t remember any of what I wrote last year.  I’ll probably write down all the same ones this season, but I still like the process of identifying what to get rid of, and making more open space for the new year.  I even have just a little faith that some might vanish up in smoke.