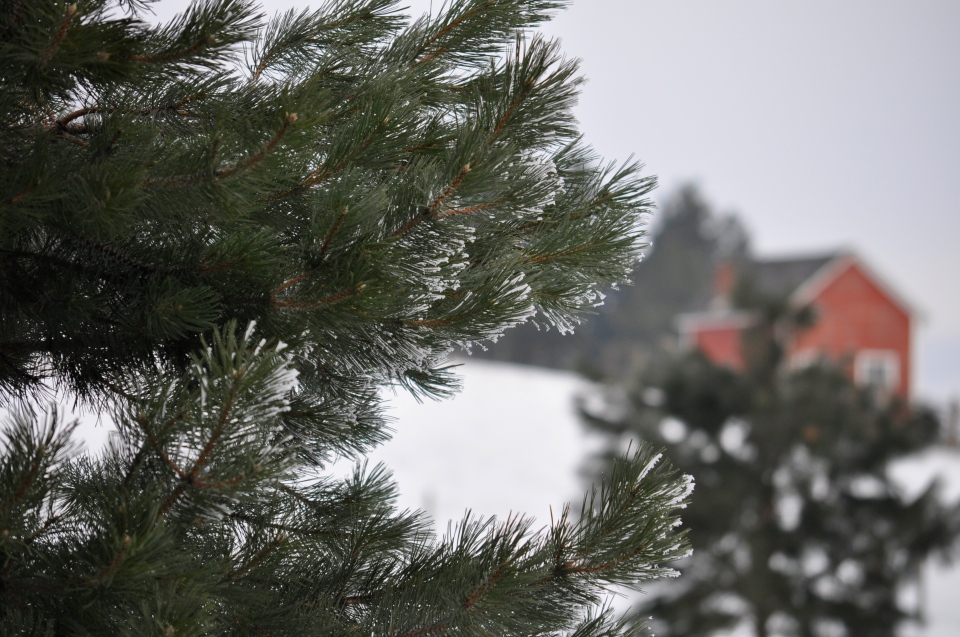 02.01.15.  February, and it’s a short month.  It feels like Winter is running out of time.  January stalled out with blah days, fog, old crusty snow and ice, not a breath of wind.  The most interesting thing has been the hoarfrost coating on trees every morning.  Groundhog Day is tomorrow and we’ll hear there is another six weeks of Winter, and it’s been very lightly snowing all afternoon.  But, still, March is next month, and even when it snows and we feel bitterly betrayed, it is, after all, March.

The wildlife look cold and lonely to me.  The deer are thinning, and I’m more likely to see a solitary skinny, frail doe shuffling alongside the road rather than a family.  There was a single Tundra Swan flying overhead this morning, and I felt for certain the Great Blue Heron had frozen into the ice on the pond, until I got closer.  Only the wild turkeys seem to be enjoying company.  I think Margaret Atwood, no stranger to Winter in the north country, describes February just perfectly.

February
BY MARGARET ATWOOD
Winter. Time to eat fat
and watch hockey. In the pewter mornings, the cat,
a black fur sausage with yellow
Houdini eyes, jumps up on the bed and tries
to get onto my head. It’s his
way of telling whether or not I’m dead.
If I’m not, he wants to be scratched; if I am
He’ll think of something. He settles
on my chest, breathing his breath
of burped-up meat and musty sofas,
purring like a washboard. Some other tomcat,
not yet a capon, has been spraying our front door,
declaring war. It’s all about sex and territory,
which are what will finish us off
in the long run. Some cat owners around here
should snip a few testicles. If we wise
hominids were sensible, we’d do that too,
or eat our young, like sharks.
But it’s love that does us in. Over and over
again, He shoots, he scores! and famine
crouches in the bedsheets, ambushing the pulsing
eiderdown, and the windchill factor hits
thirty below, and pollution pours
out of our chimneys to keep us warm.
February, month of despair,
with a skewered heart in the centre.
I think dire thoughts, and lust for French fries
with a splash of vinegar.
Cat, enough of your greedy whining
and your small pink bumhole.
Off my face! You’re the life principle,
more or less, so get going
on a little optimism around here.
Get rid of death. Celebrate increase. Make it be spring.