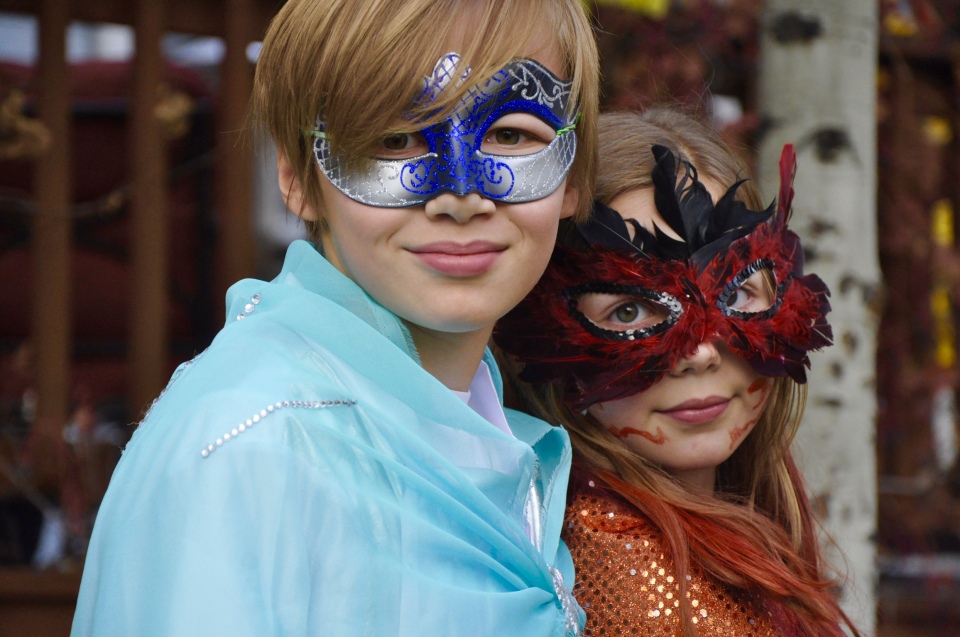 11.04.15  Duncan and Anna designed and created their Fire and Ice costumes for Halloween, spending hours attaching sequins and jewels with a glue gun.   They floated around in their capes all afternoon before the party and the trick-or-treating began, in their historic, tree-lined neighborhood.  It was perfect Halloween weather.  Golden leaves carpeted lawns and sidewalks and the weather was crisp but mild–no wind, no rain, no snow.  Just the kind of night you remember, once you’ve grown up, and think back, to a time now so very long ago.

Earlier in the morning, Fletcher and Anna won their neighborhood championship football game.   They were a team of two, playing against another brother and sister team of two.  More players had been expected, but they had obligations at home, and couldn’t make the game at the last-minute.  Starting in September, Fletcher had organized the neighborhood kids into a football league and they played their games in the small triangle of grass at the end of the alley behind the house.  The spread sheet bracket of teams and dates was posted on the kitchen bulletin board, and Halloween turned out to be the culmination of the season.  He used his allowance for a trophy engraved, “Triangle Football Neighborhood Champions”.  Despite only four players on the field, there were orange cones to identify out-of-bounds and end zones, and three referees, one of whom had a whistle professional enough to stop passers-by who were out for a Saturday morning walk.  In a closely fought battle, Anna and Fletcher, with a dramatic pass, scored the winning touchdown and kissed the trophy together for my camera.

It already feels deep into November as we start this month.  With the time change, it is dark, dark, dark at 5 p.m.  We are entering that season of saying good-bye.

On Turning Ten, by Billy Collins

The whole idea of it makes me feel
like I’m coming down with something,
something worse than any stomach ache
or the headaches I get from reading in bad light—
a kind of measles of the spirit,
a mumps of the psyche,
a disfiguring chicken pox of the soul.

You tell me it is too early to be looking back,
but that is because you have forgotten
the perfect simplicity of being one
and the beautiful complexity introduced by two.
But I can lie on my bed and remember every digit.
At four I was on an Arabian wizard.
I could make myself invisible
by drinking a glass of milk a certain way.
At seven I was a soldier, at nine a prince.

But now I am mostly at the window
watching the late afternoon light.
Back then it never fell so solemnly
against the side of my tree house,
and my bicycle never leaned against the garage
as it does today,
all the dark blue speed drained out of it.

This is the beginning of sadness, I say to myself,
as I walk through the universe in my sneakers.
It is time to say good-bye to my imaginary friends,
time to turn the first big number.

It seems only yesterday I used to believe
there was nothing under my skin but light.
If you cut me I could shine.
But now when I fall upon the sidewalks of life,
I skin my knees. I bleed.