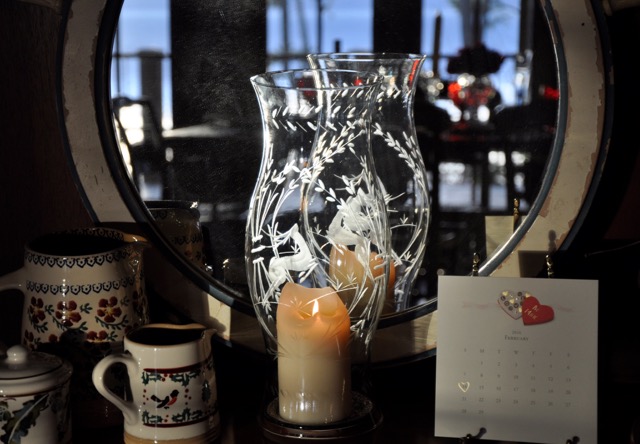 02.16.16  It’s hard to believe we are into the second half of February, and nothing about it still feels like February.  The snow is mostly gone and there were worms on the road this morning when I went running.  The robins can’t be far behind.  Families of geese have returned, honking noisily overhead, gathered in open water.  They even had to cancel the big Pond Hockey tournament this week-end.  It feels like Winter has vanished before we had a chance to complain or say good bye.

Saturday’s paper said we are one of several counties on the western side of the state to be in a “severe drought”.  It’s not a total surprise in this El Nino year, and the meteorologist said that heavy rains could make up for the lack of snow this Spring.  He suggested that we “dust off the old we-need-it saying” for this Spring.  Because we need it.  So, despite the dazzle of sunshine and balmy days we’ve been having, it was nice this morning to see it had rained in the night.  The rain was as fine as the mist off a wave at the seashore, but moisture, nonetheless.

What to make of the second half of February?  Valentine’s Day has come and gone, Groundhog Day has passed.  There’s a quote from Stockton that comes to mind:  “February’s merely as long as is needed to pass the time until March.”  It does feels like a holding pattern, a time-out-of-time period.  I’ve been reading Northern Farm, A Chronicle of Maine by Henry Beston, written in the late 1930’s.  He writes poetically about Nature’s wonder and how to inhabit it in a sacred way.  In the month of December, he describes the haunting moans of ice on a frozen lake; in January, he talks about the perfect curve which only snow can create.  And, this is what he makes of February:

“…something happens in February which the country man can only call the second great milestone of the annual rebirth. It is not a turn as definite as the solar reversal but it is every bit as real and powerful.  With us, it comes about February tenth, and even as I write, the mystery is upon us at the farm.  It is the ritual moment when winter, still visibly unconquered, and even with weeks to go, has nevertheless lost the ascendancy, and the great vital forces appear and show themselves in a first promise of their power.  It is not entirely a matter of light, great as I believe the influence of light to be.  It is not yet the rebirth of warmth for the sun as warmth does not come into power ’til the end of February.  It is really a kind of entrance into action of the life forces, solar and terrestrial, a stirring, a shaking, and an awakening of all that will remake our cold and dormant world, as the Witch of Endor said to King Saul, ‘I see gods ascending out of the Earth’.

February–gods ascending out of the Earth!