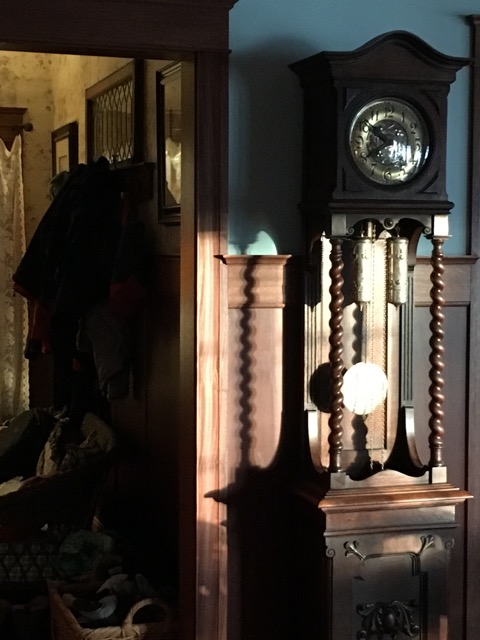 04.05.16  Of all the things I look forward to most when coming back home, it’s this clock in our living room.  After turning on the furnace, then walking down to the water’s edge, winding the clock is next on the list of settling in.  I was so looking forward to hearing it chime throughout the night, guessing at what time it might be, but the waves outside my bedroom window drowned out all other sounds.  Don said he woke up at some point, confused by the waves, and thought it was the ocean out our bedroom door.

The Hawaiians talk about being on “island time”.  I never got my clock straight.   There is something disquieting about being out there, a tiny speck in the middle of the Pacific Ocean, in a time zone that can’t catch up with “reality”.  I would come up from the beach for lunch and check online to see what was happening in the real world, and always be surprised that the NYTimes had the “evening briefing” already posted.  There would be headlines about tornadoes and snowstorms, and I’d have to search on weather.com to find out what was going on with weather patterns over the mainland.  You don’t do that when you’ve set your watch to island time.

Nor, do you try to understand the weather over the island.  My brother always says that it’s pretty much the same all the time–maybe a little warmer, maybe a stall in the trade winds, but not much to talk about.  But the winds came from different directions, the clouds were dramatic, and those waves!  Somewhere out there in the ocean, hundreds of miles away, and maybe a day or two earlier, some weather happened to create those swells which eventually came in big or small to our island shoreline.  I tried to understand the local NOAA forecast, but its language about cold fronts moving down the island chain, then suddenly stalling in front of the Big Island, and moisture embedded in the trades, and an uptick in windward showers, with clouds favoring leeward areas–well, I felt like I was Ishmael, man against nature in the great unknown.  It didn’t help that there were two earthquakes during our week, in the cover of darkness.  It was a relief one evening, sitting on our lanai and watching the pink remains of the sunset on the waves, to see the International Space Station sail brightly by over our heads.  It felt like terra firma again.

So now we are home in April, and it is pretty much the same as we left it.  Unseasonably warm temperatures are forecast for this week-end.  It will feel like a new season.  There’s nothing like that feeling of being home, wherever you have sailed.