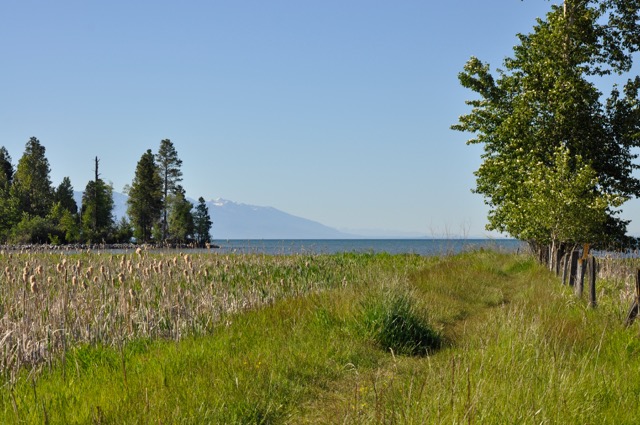 I lounged in bed this morning, listening to the hum of the boats already out on the water, and the early United flight up in the sky.   I know exactly what the view looked like out the little window as they flew overhead; it was one of those mornings when I remember being on that flight, quite certain I could see my house and dock.

June rarely feels like summer, and I laid there thinking of all the zillions of things I wanted to do today, before summer gets away from me.  I came close to lamenting the slow drowsy crawl of dark winter mornings when there is nothing to do but wait for the hours to pass until weak daylight finally fills the windows in the breakfast nook!  I needed to get my feet on the ground so I decided on a photography walk out to the north shore of the lake.  The waterfowl refuge is closed for nesting until July 15th, but there’s a path out to the water along the fence border.  I used to think of this as sacred space, back when I thought I was the only person in the Valley who knew about it.  In the fourteen years I’ve lived on the lake, scores of new homes have been built on the refuge perimeter, and the little island was bought by a west coast developer who built a concrete bridge out to it from his property at water’s edge.  Cease and desist orders are nailed to his fencing and the case is tied up in lawsuits under a host of jurisdictions.  There’s a hint of bad juju about the place right now.

But, on this summery morning, I just had to go out and hear the rustle of the leaves, the bird songs, and soak in the lush green wetlands, dotted with buttercups.   Looking south over the expanse of the lake and the snow-covered peaks always takes my breath away.  I stepped slowly and deliberately on this ground, as if I could soak up all the beauty just by being still.  As I neared the water’s edge, I spotted a man sitting on a log, with an old dog at his side.  I did not want to disturb his reverie so I turned around…I imagined he was feeling that this was holy ground.

Brother David Stendl-Rast talks about how taking off one’s shoes is part of many traditions, such as before entering a Mosque.  He says that it isn’t about entering that special space, but about feeling the earth under our feet before entering, so we can know we are already standing on holy ground.  I can only imagine what that would feel like if we put our feet on the ground, when we got out of bed first thing in the morning, and knew it was holy ground.

“If we had a keen vision and feeling of all ordinary human life, it would be like hearing the grass grow and the squirrel’s heart beat, and we should die of that roar which lies on the other side of silence.” –George Eliot