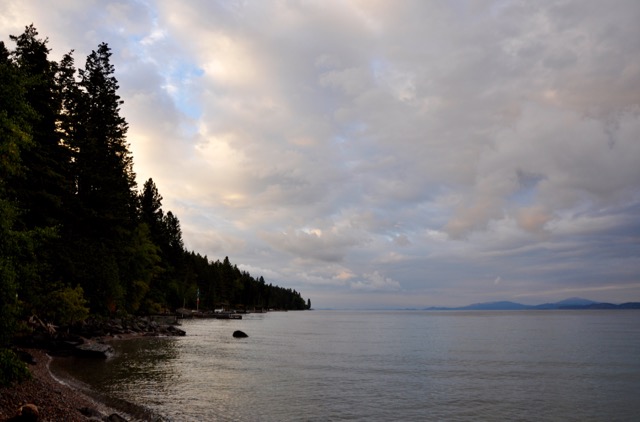 “Come said the wind to
the leaves one day,
Come o’re the meadows
and we will play.
Put on your dresses
scarlet and gold,
For summer is gone
and the days grow cold.”
– A Children’s Song of the 1880’s

September arrived with a big bang, literally.  I had just flown in from California, and when the calendar turned over to September at midnight, a bolt of lightning must have hit the lake.  I awakened with a scream at the sharpest and loudest crack of shattering thunder I’ve ever heard here in Montana.   I had already been restless, trying to sleep, back in my own cozy bed.   The lake was eerily calm, the air heavy and still, and I kept thinking that maybe I should just get up and close the window to shut out the deafening silence.   I was just not home yet.  After a week’s road trip with Sarah and her dog, and walking grandkids back to school in the California sunshine, I’d totally lost track of my own weather.

Ah, the morning came.  It had silently rained and the air was cold and clean.  Standing on the dock at sunrise, I spotted Eamon’s water shoes, left next to a kayak, and the dogs’ frisbee lay on the rocks.  Three beach towels were still left on the back of a chair.  But I could see that summer had left in the night.  I think it probably always happens like this the first of September, but compared to the spring, which feels like a long agonizing transition from winter to summer, fall’s sudden arrival, in one day, feels startling.  I would like some time to adjust, before I sharpen my pencils and open a new notebook, but, off we go, ‘said the wind to the leaves one day’!