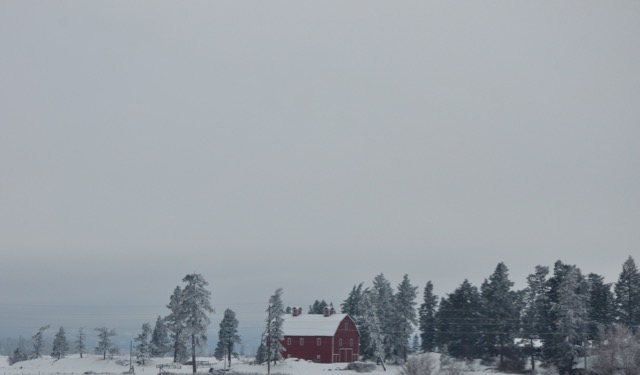 “In nature, everything has a job.  The job of the fog is to beautify further the existing beauties.”  Mehmet Murat ildan

We are under an inversion now.  Most days, the sun breaks through in the afternoon and is especially glaring as it shines through ice crystals in the air, but the fog creeps back in during the cover of darkness.  As I drive over the frozen white Flathead River to go into town, this red barn is such a beautiful pop of color on another gray day.   In summer, with the sparkling blue waters of Flathead Lake behind it, it’s a picture postcard.  But, I like it in the winter, how it stands out as a sentry in a white field.   It feels like a lighthouse, as if I’m on a ship out at sea, comforted to know where there is land.

The other thing I’ve been watching during these foggy days, just a quarter of a mile or so past this barn, are the Bald Eagles, silhouetted in trees which line the river.  In the big snowy field between the road and the river, there is a dead deer or fox or coyote, partially buried in the snow.  Ravens on the ground have encircled it, but there is always one Eagle who stands nearby, but apart.  There is a certain loss of dignity to see this great white-headed creature standing on the ground amidst ravens and crows, but he is always king of the feast.   Beyond, back in the trees and staggered on different branches, I’ve counted as many as six Bald Eagles, perched still and silently, awaiting their turn.  And, over on the south side of the highway, a flock of Canada Geese are deep in the snow, pecking for seeds in the tracks which a farmer has made for them.  I often think maybe I’ve seen a Snowy Owl in a low-lying branch near the road, but discover it’s a white plastic bag, caught in the thicket.  And, the deer family in our yard make their daily late afternoon trek down to the water, slowing trudging through ever-deepening snow.  Wild turkeys have been sheltering in place on the front porch.  It’s an ancient winter’s tale out there, as well as in here by the cozy fire, and on and on it goes.

“I prefer winter and fall, when you feel the bone structure of the landscape. Something waits beneath it; the whole story doesn’t show.”   Andrew Wyeth