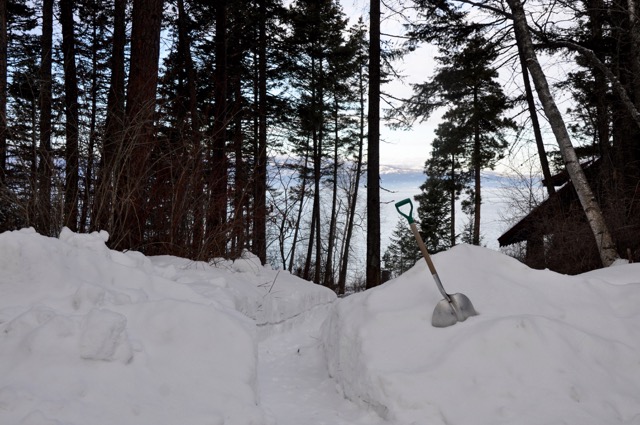 Man, this feels like the ‘Winter of Our Discontent’, though I know the weather is just a small part of it.  Whenever I fly back home in winter, I think it’s going to be over, even if I’m gone just a few days, as I was in DC.  There is, to be fair, so much more light in the sky now, especially at the end of the day.  The trees on the porch and terrace, draped in white lights, look odd at 4 pm when the timer turns them on.  But, it snows and it fogs, just like it’s supposed to at the end of January.  I’m having to park my car at the top of the road, as solid ice ruts lead down to the house.  Don brings wheel barrow after wheel barrow of wood through this path he’s made in the snow.  There are still stacks of books to be read by the fireplace, and the kitties get to have a little fireside chat each evening.  I made “Saint Antony Soup” last night from the January chapter in Twelve Months of Monastery Soups.  Saint Antony of Egypt is considered to be the father of all monks.  The story goes that at age 18, he went to the desert as a hermit, dedicated his life to God in continual prayer, and supported himself by gardening.  I can see how January might do that to a person.

It’s been one week today since I flew to Salt Lake, then to Detroit, and finally into Baltimore to join my daughters, sisters, niece, and granddaughters for the Women’s March.  How our light did shine together!  It has warmed me up, this final week of January.  In the afterglow, all of us our processing how it has transformed us, and talking about what we can do as individuals and together.  There is much hard work ahead.  February, a transitional month, is just around the corner.  “Earth begins to kick just a bit.”  According to whats-your-sign.com, the ancient Romans identified Februarius as “The Month of Purification” and a time in which to focus on righteous living.  Valerie, my Valentine’s Day daughter, wrote a note to her state Senator about attending the March, and it warms my heart as we transition into the next month, into the future:

“I traveled from California to Washington DC to march with three generations of women in my family and here’s why: I wanted to show my 11 year old daughter that even though our country elected a man who denigrates and dehumanizes women, still as women and girls we are not powerless. I wanted my body and the bodies of my mother, sisters, aunt, daughter, niece and friends to be counted in the headlines of the following day and the ledger book of history. And because I want to reclaim the mantle of Patriot — which too many of us on the left have shunned for too long — because standing up for the values and ideals of one’s country is the most fundamental and essential act of patriotism for any citizen.”—Valerie Crissey Lee

Let Them Not Say
Jane Hirshfield, 1953

Let them not say: we did not see it.
We saw.

Let them not say: we did not hear it.
We heard.

Let them not say: they did not taste it.
We ate, we trembled.

Let them not say: it was not spoken, not written.
We spoke,
we witnessed with voices and hands.

Let them not say: they did nothing.
We did not-enough.

Let them say, as they must say something:

A kerosene beauty.
It burned.

Let them say we warmed ourselves by it,
read by its light, praised,
and it burned.