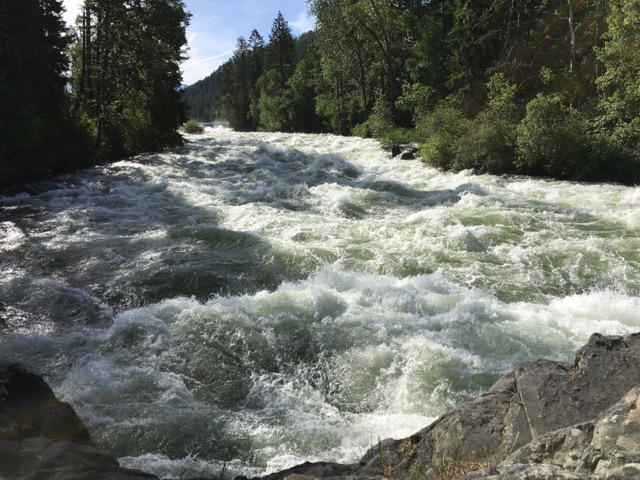 The meteorologists are describing this period as a “rollercoaster” week.  Despite the fact they are predicting snow above 5500 feet for the week-end, the next couple of days “will warm profoundly with valley temperatures reaching the 90’s on Wednesday afternoon, and rivers and streams will continue to run high and swift.”  They can be so poetic.  I walked down to the ‘high and swift’ Swan River’s edge this morning, while out on my run along the River Trail.  As I sat on the rock, feeling the powerful roar, I thought that this is how it is to wake up in the morning, and read the first breaking news of the day.   Stories of violence and rage just keep coming at us, and it seems we are caught in the torrents on a rudderless ship, and captained by an emperor with no clothes.  Fearful of losing my balance,  I sat down on the rock.  It takes effort to maintain balance through many of these bad news days.

No wonder so many people are binge watching TV programs.  Our go-to has been the new Canadian production of Anne (with an E) of Green Gables.  If it’s gloomy outside and the news of the day has been particularly jarring, we’ll watch several episodes in a row.  We couldn’t help ourselves, and finished the series on Sunday night.  I’m reading a book entitled, Listening Below the Noise…The Transformative Power of Silence, by Anne D. LeClaire, as well as The Poet’s Companion, by Dorianne Laux.  Don is reading two historical baseball books, one about the Oakland A’s and the other the New York Yankees.  I’ve signed up for YOMO at my yoga gym, committing to doing yoga every day for a month.  I went to the yoga philosophy club meeting on Sunday, and we discussed the Pantanjali Sutra 1.2, which teaches yoga cite virtue nirodh–yoga is the cessation of fluctuations in the mind.  Just trying to keep in balance.   Anne (with an E) probably gives us the most simple and clearest of hopes when she describes the glimpses she sees behind a thin veil:

“It has always seemed to me,  ever since early childhood, amid all the commonplaces of life, i was very near to a kingdom of ideal beauty. Between it and me hung only a thin veil. I could never draw it quite aside, but sometimes a wind fluttered it and I caught a glimpse of the enchanting realms beyond-only a glimpse-but those glimpses have always made life worthwhile.”