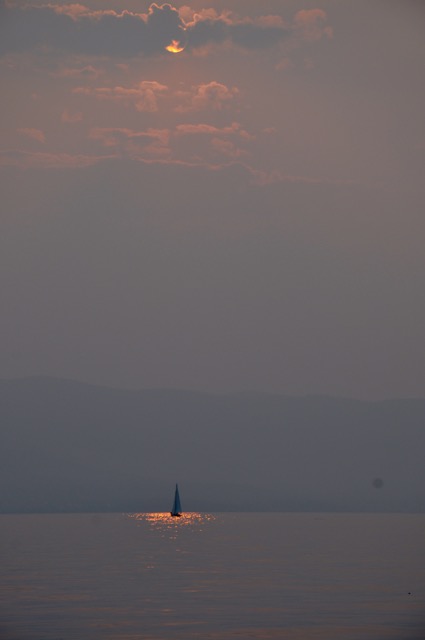 Desolate and lone
All night long on the lake
Where fog trails and mist creeps,
The whistle of a boat
Calls and cries unendingly,
Like some lost child
In tears and trouble
Hunting the harbor’s breast
And the harbor’s eyes.

This was the last photograph I took before we left Montana.  We are deep into fire season now and smoke from Canada, Washington, Oregon, California has filled our valley, as well as smoke of our own from nearby dangerous fires.  Once again, Glacier National Park has closed down the west side, historic structures have burned to the ground, and the Going to the Sun Road is at risk.  As we drove away, there was a “there’s an east wind coming, Watson” weather alert, and we watched the offshore wind create whitecaps and strange swirls in the water, as we drove down the east shore to Missoula, for our flight to California.  We hoped our boats were secure and that we’d left the property well-watered.  I always leave home with that feeling of being a snail pulled off my rock, but it’s even worse in fire season.

Now, we are in Oakland, helping Sarah hobble around with her broken ankle, and keeping on eye on the air quality alerts here at the coast.  A major attraction for the Berkeley grandkids, with our visit, has been the string of Oakland A’s games while we are in town.  Ten-year old Cormac was with his Dad in British Columbia, and ended up going to the hospital there with a smoke-induced asthma attack.  They arrived home in the wee hours last night, and we are hoping the air quality will improve enough for him to take in some of this afternoon’s game.  My brother and sister-in-law, who live in Hawaii, are scheduled to meet us back in Montana for a little holiday on our lake at the end of this week.   And, here comes Hurricane Lane, bearing down on the islands over the next few days.

The Earth&Sky blog today talked about how scientists have discovered, in the geologic record of rocks,  a “fast flip in the Earth’s magnetic fields”, and the implications the next one would present for our globally interconnected world of satellites and electrical grids.  All around the globe, there are earthquakes, floods, brutal civil wars, and the suffering and destitution of millions of people.  Add on the scandals and crimes, lies and deceit in the backyard of our own government, in the sanctuary of our churches, and it’s enough to make me wish I could crawl inside my snail’s shell to hide–“Like some lost child in tears and trouble…”

Instead, while the able-bodied family members went to another A’s winning game last night, I made Sarah a new recipe from The New York Times– a comforting pasta dish made with jalapeños and orecchiette.   The house filled with that rich smell of roasting pepper, and how can you not find joy in those little tiny ears, which soak up the creamy feta cheese and fresh basil.  Sarah sat on the chaise side of her sectional sofa, with an ice pack on her ankle, and we eat our delicious dinner, drank a bottle of wine, and watched “So you think you can dance” on TV.   This morning, we are given a new day.  We are now ten days from the start of September and the glorious prospect of Autumn, and the rains, and snow-dusting over the wildfires.   AND, we have so much pasta left for the next few days.  We are making in through…

1 thought on “Making it through”