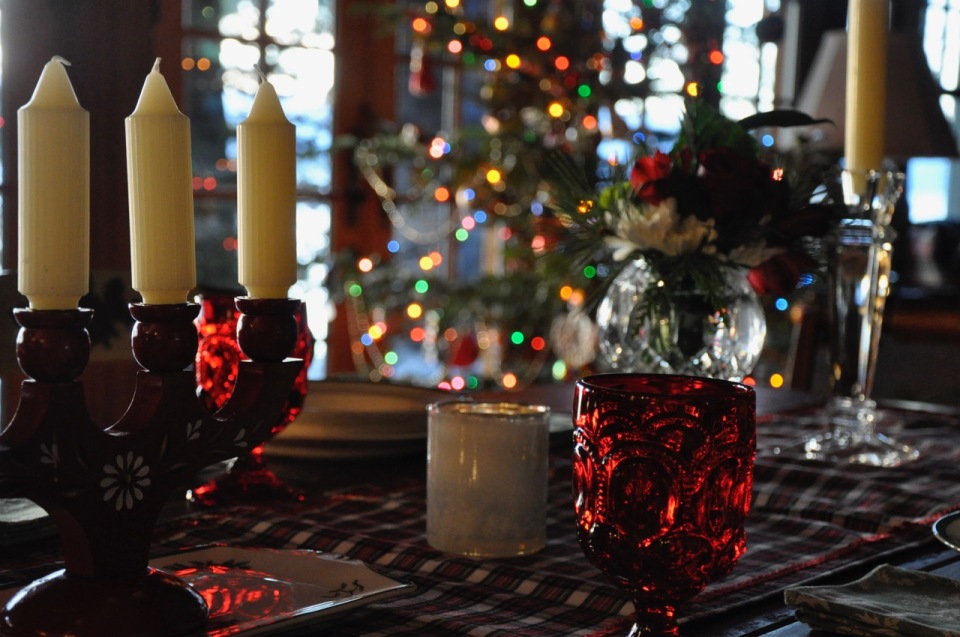 Such sunshine and merriment this week!  We had dear friends down to the house to celebrate our anniversary with us, on a cold and starlit night.  After a clear and sunny day, it became one of those nights in which the stars shone all the way down to the horizon, were reflected in the lake, and twinkled between the branches of tall pines behind the house.  The International Space Station is back on its evening orbit over our house.  There are two Americans, two Russians, one Canadian and one German aboard, and on Wednesday, A Christmas dinner of turkey, candied yams, cranberry sauce and fruitcake, was rocketed up to the station.  So, last night, at 5:27, we stood on the dock, looked WNW, and watched them fly overhead for six minutes, as little dots of evening stars came into view around them.   We wondered if it was their sleeping cycle as they passed over, or were they looking down at this beautiful blue mother earth, witnessing her peril.

All the starlight ever produced was measured this week.  According to earthsky.org, scientists have measured, “all the starlight ever produced throughout the 13.7 billion year history of the observable universe.”  I wish they hadn’t done that–it makes it sound like there will be no more starlight.  In other news on the blog, they reported that SETI has found “no artificial emissions” from Oumuamua–that was the “interloper” spotted last year in our solar system.  They figured it was an asteroid or a comet, but considered it might also be an “alien artifact”.  Every once in a while, I’d see an article online about this strange object, which astrophysicists considered might be a light sail or solar spacecraft, constructed by?  I think this SETI discovery is probably a good thing for us all.

I’ve been reading the theoretical physicist, Alan Lightman, Searching for Stars on an Island in Maine this past year, and it is always a peaceful retreat from the fraught world we live in.  Best known for the book, Einstein’s Dreams, his discussions about the nature of the universe and human consciousness slide pretty much completely beyond my understanding, but his graceful writing leaves me with a sense of wonder that what is real, is in those stars, and winter skies may be the best gift of the season.

“At some point in the future, new stars will cease being born. Slowly but surely, the stars of our universe are winking out. A day will come when the night sky will be totally black, and the day sky will be totally black as well. Solar systems will become planets orbiting dead stars. According to astrophysical calculations, in about a million billion years, plus or minus, even those dead solar systems will be disrupted from chance gravitational encounters with other stars. In about ten billion billion years, even galaxies will be disrupted, the cold spheres that were once stars flung out to coast solo through empty space.”
― Alan Lightman, The Accidental Universe

BUT, in the meantime…

“Suppose that time is not a quantity but a quality, like the luminescence of the night above the trees just when a rising moon has touched the treeline. Time exists, but it cannot be measured.”
― Alan Lightman, Einstein’s Dreams