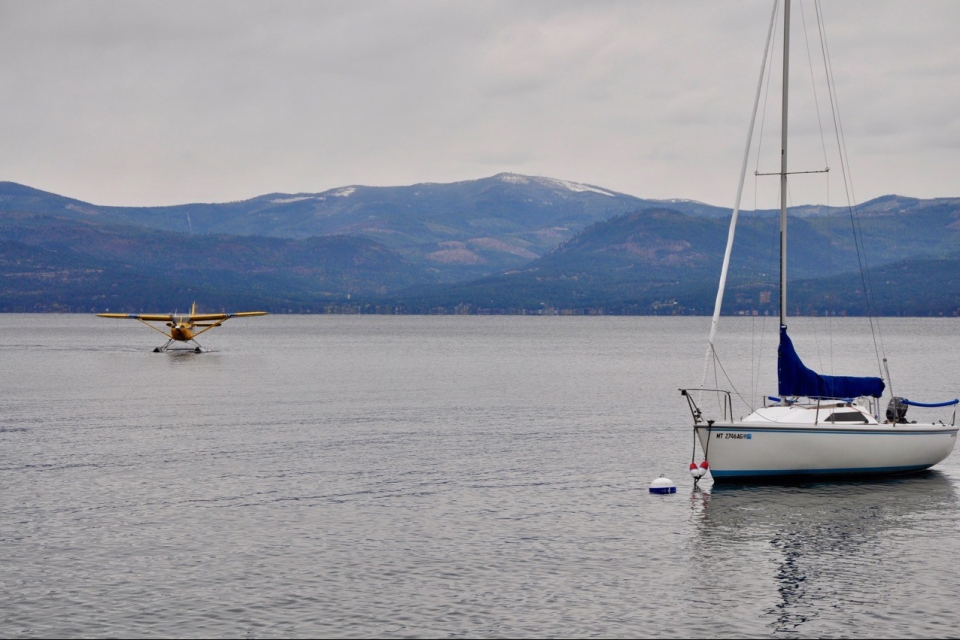 We’ve been the only vehicle on the lake, and then we had company one day last week.  You can hear a seaplane from inside the house, so we rushed out to the dock to see what was happening, and there was this cheery yellow plane doing take-offs and landings on the calm water.   It seemed like he was putting on a performance just for us, and we waved hello, and stood out in the cold until he disappeared high in the sky to the north.  It was so quiet after he was gone, and it felt quite lonely out there on the dock, with all the summer people now gone, and our solitary sailboat bobbing in the water, fresh snow on the peaks across the lake.

The weather gods have blessed us the past few days with crisp, cold autumn days of deep blue sky and golden leaves.  The boat was finally sailed south to dry dock yesterday on such a fine day.  While they looked like they were headed out for the Iditarod, Don said it was glorious to be the only boat on this enormous lake, with tundra swans flying overhead, their feathers so white in the sunshine.  I went for a long afternoon walk over in Somers, so I could be closer when I got the phone call to retrieve them from the Dayton Marina.  Colleen recently returned from spending most of summer in Alaska, and we walked everywhere through the Waterfowl Protection Zone, catching up on our months apart.  There was ice at water’s edge and through the wetland grasses, but the sun was warm and a pair of swans flew low over our heads.  I felt goosebumps to hear the beat of their wings.  At home late in the day, Don paddled out to bring the raft back from the mooring ball and removed the bridle, and we got it all stored away in the boathouse.  Chatpeau and I stayed out at water’s edge all through the golden eventide–that beautiful Old English phrase for “evening”–when the setting of the sun is a magical event, outside of Time somehow.  I took photos of the golden paper birch tree reflected in the water, and the blue and white mooring ball, left alone by the sailboat, and tried to capture the remains of a splendid day, coming to its bittersweet end.  Autumn will do this to us–it always does.

“What, then, of autumn — that liminal space between beauty and bleakness, foreboding and bittersweet, yet lovely in its own way? Colette, in her meditation on the splendor of autumn and the autumn of life, celebrated it as a beginning rather than a decline. But perhaps it is neither — perhaps, between its falling leaves and fading light, it is not a movement toward gain or loss but an invitation to attentive stillness and absolute presence, reminding us to cherish the beauty of life not despite its perishability but precisely because of it; because the impermanence of things — of seasons and lifetimes and galaxies and loves — is what confers preciousness and sweetness upon them.”  Maria Popova, Brain Pickings

1 thought on “A visitor”