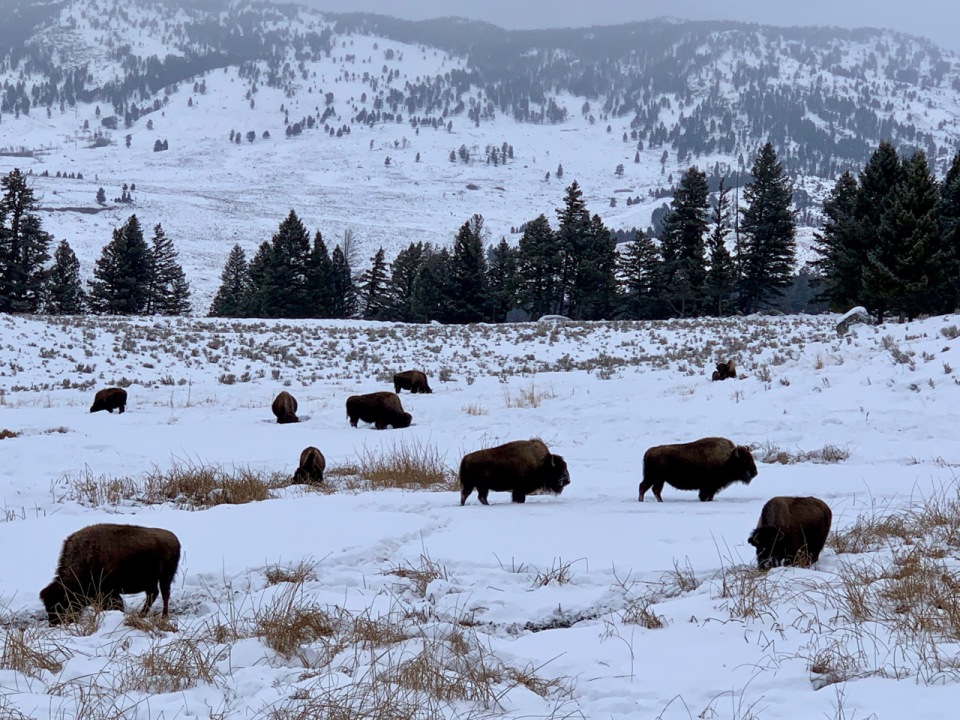 I have had writer’s block, finding nothing about the lackluster weather to inspire me.  The frequent sunshine has been nice, but seeing how it is still January, rain instead of snow is disheartening.  The last three days, I’ve been listening into the Impeachment Hearings, disheartening in an entirely different way.  I guess you could call it the January Blues.

But, we had a break in things with our trip to Chico Hot Springs.  It was mild with skimpy snow in Pray, Montana, but we drove into Yellowstone one day, and at the point where the road was closed for the winter season, they had groomed a trail for skiing.  The temperature was in the mid-twenties, and there was a misty sort of light snowfall, and not a skiff of breeze.  On the drive into the Park,  we passed herd after herd of bison, and a small gathering of large elk bulls, peacefully lying on a hillside, majestic with their enormous antlers.  They are true sculptural works of art.  We parked at the road’s closure, and I snowshoed while the others skied in the set tracks, up a gentle climb through the trees, with the canyon and river on one side, steam rising up from the hot springs below.   It was so quiet.  We saw tracks of snowshoe hares, coyote, and even wolf scat.  At the place we had parked the car, a herd of bison grazed right next to the road.  We could hear their grunts, watch how they move their enormous heads back and forth to clear snow in search of food.  To be so near this powerful creature, is to understand it as a spirit animal to Native Americans, and its holiness is unmistakable.  It was a wonderful way to find some Winter.

Now, we are back home to highs in the 40’s, mix of rain and snow showers, and sun here and there.  I’ve been so bored in reading our NOAA forecast that I’ve begun to follow the Finnish Meteorological Institute’s weather blog, which Joy forwarded to me, named Weather and Sea–what a thoroughly romantic title.  I love today’s forecast:

Northern Baltic, Sea of Åland, Sea of Archipelago and Sea of Bothnia

West to northwest 5-10 m/s. After midnight becoming west to southwest and somewhat increasing, after midnight 7-12, on Northern Baltic in the morning up to 14. Good vis, by night on Sea of Bothnia local rain or sleet.

When I googled a map, the Sea of Bothnia is at the north end of the Baltic Sea, separating Sweden and Finland.  One month from today, we’ll be even farther north than the Sea of Bothnia, on the Arctic Circle line, in Rovaniemi, Lapland.  Joy has already bought the train tickets.  Be careful what you wish for?!

In the meantime, being near the Yellowstone bison reminded me of a quote from Crowfoot, a Native American orator in the mid 1800’s.   I’ve referenced his words on this blog in the past, during other times when I’ve been ungrounded and unsettled, and uncertain of what it’s all about, and when I need to be reminded of what’s important.

“What is life?  It is the flash of a firefly in the night.  It is the breath of a buffalo in the Wintertime.  It is the little shadow which runs across the grass and loses itself in the sunset.”