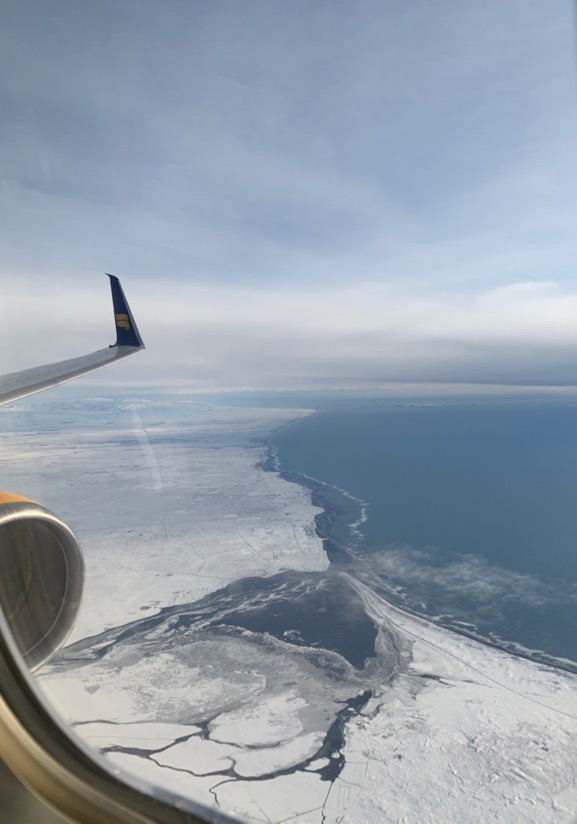 I love watching the flight tracker screen on transcontinental adventures.  We are flying over the west coast of Iceland, in this photo, on our way to the white landscape of Greenland, at the Arctic Circle.  We had totally clear skies both to and from Seattle, and on the outbound trip over Greenland, the sky was full of bright stars, and, the dazzling, beautiful Aurora Borealis.  While everyone in our cabin was sleeping, I put a blanket over my head to block out interior lighting,  and watched out my window for a good four hours.  When it dimmed a bit, I would close my eyes and hope to fall asleep, but then I would look again and they were even more spectacular.  I looked around to see if anybody else was watching, and when nobody stirred, I walked up to the alcove where the flight attendants were sitting, and they said it was one of the best shows they’d ever seen.  Later, when we were in Finland, Joy asked if I took any photos, and, I realized it never occurred to me–I was just too overwhelmed.  I did take a sunrise photo, just out of Rekayjevek, of the waning crescent moon, looking as if it were setting behind a sea of thin clouds.  It is otherworldly out there, in the cosmos, so far from home.

I think of Montana as the north country, but, au contraire, Finland is truly north.  Even though there was no snow on the ground, and many of the Nordic countries are experiencing their warmest winter in a century, it was cold.  The temperatures may have been in the mid-twenties, but when the rain and sleet and snow slashed against us, it was  bitter.  In our two days at the Arctic Circle in Rovaniemi Lapland, it reached 32 degrees, but we had snow on the ground, and the reindeer sleigh ride through the forest, with stars lighting the snow, was magical.  There was a bit of northern lights out in the forest, but when our guide dropped us back at our apartment, he told us his app predicted a great show in an hour or so, and told us the best place to walk to in Rovaniemi, down by the frozen river.  So, late as it was, we all trudged through the dark (so happy I had brought ice cleats to put over my boots) and made our way down the hill to the river, where maybe 100 people stood on the ice, with little dots of light from their phones, poised for the Aurora Borealis.  We were not disappointed, as the green and yellow lights swirled in the sky across the river.  They were not nearly as strong as the event I saw from the plane, but I’ll remember them brighter, because our little family saw it together.

Our last days back in Tampere were filled with bright sunshine as we walked about, exploring the sights.  It’s a lovely city with beautiful historic architecture, and a river runs through it, connecting the two lakes on either side, which provides hydropower.   The city is made for being outside with paths all through town and into the forests, and market lights strung across the streets to light the polar dark.  The children, dressed in snow suits and hats with pompoms, play in the parks as if it’s 70 degrees.  It felt so calm and civilized somehow.  Maybe it had something to do with the city library, designed to look like a bird with outstretched wings, where there were candles on the tables inside, under windows which looked up to the sky.

It was 55 degrees here yesterday, on our first full day back at the lake. ( Joy wrote that it was 8 degrees in Tampere.)  It was below zero here this time last year and the lake was just about to freeze over.  We celebrated being home with cocktails on the bench down at the water, and Chatpeau rolled around on the warm concrete dock.  We talked about what a great trip it was, beginning to sort out the memories we made.   I think my favorite times were when we walked from our hotel for dinner at the Honea’s apartment, maybe 10 minutes, up the narrow street, past cozy restaurants.  We would cross over to the walking path, crunchy with gravel which is spread over the snow and ice, and then take the diagonal through the cathedral grounds, where their Soviet bloc style apartment building came into view.  We’d see their garland of string lights lit over the patio on the fourth floor.  Once we were buzzed up, we’d stand at the kitchen window with a beer, and look out at the sunset, as pink light spread behind the magnificient cathedral.  Its enormous round stained glass window was pink and lavender and the tall skinny towers were out of a fairy tale.  Sometimes there was a light in a tiny little window near the top of a tower, and on our final night, Joy pointed out the tiny sliver of the now waxing crescent moon.   In those moments, it did not feel so very far from home–being with family is always home, wherever that takes you.

2 thoughts on “Far from home”