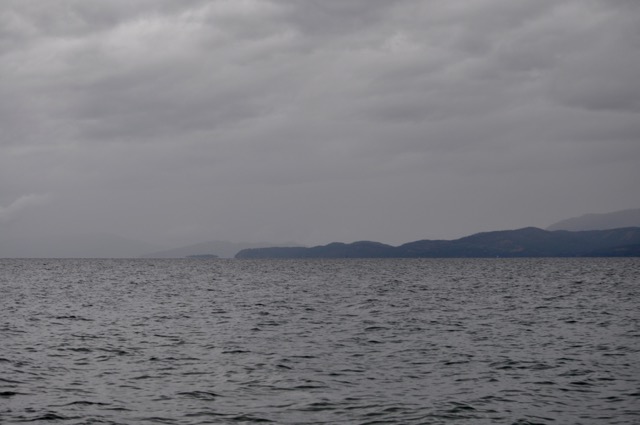 09.06.15  It has rained, and rained, and rained–a raw, cold, drenching rain.  It feels like it’s been for weeks, but it was just one week ago when I drove Valerie and the kids to the airport in the hot smoke.  Colleen and I, not believing it could rain so hard, went to Glacier Park anyway yesterday afternoon, and found Going to the Sun road was closed at the pass because of snowfall.  We went on a soaking wet walk and then joined the hoards of campers and hikers who were huddled around the fire at Lake MacDonald Lodge.  Visitors from Michigan asked us if it was true that there had been no rain all summer.  Difficult to imagine with such a storm raging outside.  And, we all talked about how this was surely a game-changer for the forest fire season.

It’s changing here at my house now.  Sarah and Nick are off to Yellowstone for the holiday week-end, and Don was gone last night, for a crazy all night bike race, camping out in the pouring rains.  So I was alone when I arrived home in the dark, relieved to get here after driving for an hour on rain-blackened roads with the windshield wipers going at full speed.  I went up to the guest cabin with the lantern to feed Sarah’s cat, Ladybird.  It felt lonely up there without Sarah and Nick but shy Ladybird at least came out from under the bed to peer at me.  Soon, after three weeks of family visits, it will just be Don and I again, preparing the house for Winter.  Still cold from the rain, I went to bed with both a wool blanket and the down comforter wrapped around me, and listened to the pounding waves and rain off the roof, and couldn’t stop thinking about the images of migrants fleeing their homes for Europe.  Desperate for refuge.  And here I was, snug in my bed, in this warm and cozy home, which has been filled with family love all summer.   It’s hard to go to sleep sometimes on rainy nights such as these.