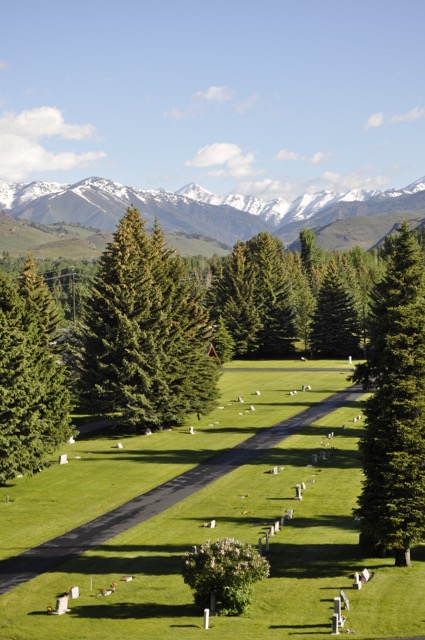 When I made reservations at the small hotel in Ketchum, Idaho, they asked if I minded having a room that looked out over a cemetery, “with a beautiful view, otherwise.”  While we were there on our short holiday, in the news, there were the dreadful images of the apartment fire in London, against the blue sky of morning, as well as the baseball shooting in DC.   One of the congressmen was quoted afterwards, “we’re not promised tomorrow”.  I thought about that as I gazed out our glass doors.  ‘Otherwise’ IS the view at the heart of it all–our inescapable carpe diem.

I turn to the weather when the news is all too much–that Force of Nature just doing its thing, no matter what is happening in our tiny human lives.    We had driven to Idaho in hard rain much of the day and the rivers and streams were close to flood stage.  We followed the rain total tallies back home online, and made sure to check the road report before we drove back–last February, our route was closed to avalanches.  It was such a good soaking rain here in our absence and it appears the kitties spent their time nestled in the wool throws I’d left for them on the front porch.  The robin did not make a new nest after all.   However, Don saw a huge mountain lion cross the driveway in front of him yesterday, and the neighbor called last night, just as I was about to go watch the sunset from our dock, that there was a black bear in their yard.  I decided to watch from the window.

There was lightning and thunder in the middle of the night and a drenching squall of rain, ushering in a high pressure system at last.  It’s clear and blue and fresh this early morning.  Don left for a bike race in Lolo, and I’m off for the beautiful drive to Helena to watch Anna’s soccer tournament.  I’ll get home tomorrow.   And, while I know I’m not promised tomorrow, the Summer Solstice arrives in four days, along with the phenomenon of the slowest sunsets of the year, with the possibility of stunning views from our dock.

1 thought on “‘We’re not promised tomorrow’”